Posted on November 12, 2017 by CharlieClaywell 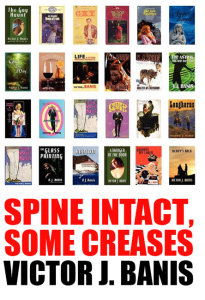 If you walk into Eaton High School in Preble County you will not find any quotes from our most prolific author. In fact, you’d be hard pressed to find anyone who has heard of Victor J. Banis — a 1955 EHS graduate.

I stumbled across his name on the Preble County Wikipedia page — and then I read his 2008, 400+ page memoir, Spine Intact, Some Creases.

I found him to be a very interesting individual.

His book should appeal to at least three categories of readers:

Victor is listed as a juvenile living at home in his father’s 1954 obituary. In the book, Banis details his last conversation with his father.

Banis moved out of Preble County after high school and within a decade found himself indicted in Sioux City, Iowa for ‘conspiracy to distribute obscene material’. Banis was indicted for his novel The Affairs of Gloria. As Banis writes in the foreword of the re-release of The Why Not — Gloria,

…had one ‘damn’ in it and one ‘go to hell.’ It did, however, significantly have some — again tepid — lesbian scenes.

Banis would eventually be dropped from the case (the other defendants were not), but he still spent the first decade of his writing career with a suitcase packed and an open offer to move overseas should another indictment be handed down.

A conviction in these obscenity cases could yield a 20-year or longer prison sentence.

But, instead of prison, for more than a decade Banis was at the forefront of the popular gay fiction scene. And, in true capitalism form, it proved quite profitable because he had found an unmet need. In the early 1970s, Banis was earning about $200,000 a year — the equivalent of $1.2 million today.

Not bad for a former Preble County resident.

Eventually, Banis would write in several genres, including straight romance, but it is his 1960s gay C.A.M.P. series that collectors seek out. Those interested in his work will find a bibliography of about 150 titles in Spine Intact.

Being Gay In Small Town America

Although I found his First Amendment battles intriguing, and his personal life interesting, another appeal was the local history. Included in the 27-chapter book are roughly four chapters worth of local history. Some of it is a little salacious for this region — his cross-dressing Halloween adventure at the Armory at the age of 12, the first time a male classmate expressed a romantic interest in him, and his romantic liaison at 17 with his 26-year-old Boy Scout leader. He writes,

When I began a relationship with my friend I was lonely to a suicidal degree. I knew only one other gay youth in Eaton, Ohio. There were gay adult males in town but, mindful of their own safety, they avoided involvement with someone so young…In retrospect I suppose that the folks in Eaton, Ohio, who guessed what was going on with my friend and me thought it none of their business. 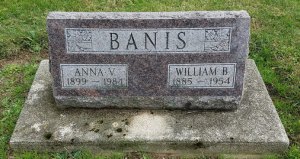 The relationship would lead to a nonfiction work, Men and their Boys: the homosexual relationship between adult and adolescent (1966), in which Banis interviews homosexuals males that had relationships with older men.

Early in this memoir, Banis states that Sherwood Anderson’s Winesburg, Ohio is about Preble County (Anderson was born here, but moved by age two to Clyde, Ohio). If Banis’ assertion is accurate, Anderson’s work paints our dark side.

And when you read some of the incidents in Banis’ life, his assertion may be true.

In his book, Banis describes how his family ‘saw’ his oldest brother on a back country road in Preble County the night he was killed in Italy. Banis’ brother died in WWII shortly after his 23rd birthday.

As a Preble County resident, Banis grew up poor in the 1940s and 1950s. It was an era where being gay was a crime and it was a region, then as now, where homosexuality, by and large, is not accepted as natural. But, indirectly, this book challenges what we say we believe by showing us who we are. Banis mentions the gay local politicians, the homosexual book he found at a Preble County drug store in his youth, and the regional gay bars and hangouts that he frequented in his late teens/early 20s.

And he also exposes the crimes committed against gays by those in authority. Banis admits being gang raped by three officers (he does not offer location) and reports how, in Indianapolis, police officers abused gays at a party he attended. As you read the story of his youth and early 20s, the man has a right to be bitter, but he is not. Instead what flows through his words is a kind man filled with understanding, forgiveness and humor. He is witty. He occasionally ‘name drops’ (Hugh Hefner comes to mind). He jokes about his sexual liaisons with military personnel and, in general, he upholds his journey as one he was blessed to have travelled.

He also acknowledges the challenge his mother faced — being a Christian with a gay son. But, I feel his mother may have had a mischievous side when it came to the whispers that she almost certainly heard from the righteous.

While visiting him in California, Banis’ mom asked for a copy of some of his work (probably C.A.M.P., the gay male series, based on the vignette). And, as Banis notes, he presumed the books would go into a drawer somewhere so she could say she had a copy of them. Instead, mom decides to let her minister (Church of the Brethren), an aspiring writer who had expressed interested in her son’s writing career, read one. Banis writes,

The Reverend never expressed to her or to me any opinion on the books’ literary merits. Indeed, he never mentioned them to me at all, but he did look at me rather differently on my subsequent visits.

He never asked again about my writing either, and the next time I visited church with my mother the sermon was on ‘the Unintentional Sinner.’ I kept my gaze straight forward and sang the hymns with gusto, although I got through ‘He knows me as I am’ with some difficulty.

My only criticism of the book is it could have ended a little sooner. By his own admission, he meanders. By the end of the book, you will read several chapters offering would-be writers advice and some self-esteem tips. It’s all solid writing, it just feels somewhat out of place for this book.

Residents of Eaton, Ohio should know at least one of Banis’ sisters, Fanny. She was mayor of Eaton from 1993-1998.

Categories: Americans Who Got It Right, Books I have read, My America, Preble County, Understanding Trump Counties