Posted on August 5, 2017 by CharlieClaywell 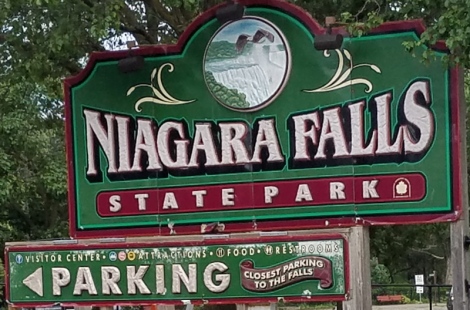 Trump, the man who gave up his billionaire lifestyle to be humiliated and ridiculed and slandered in order to save the American people — post on Preble County’s Republican Facebook page.

Last fall my wife and I took up a new hobby — hiking and camping. We began this new chapter in our life in Hocking Hills, Ohio and have, in the past nine months or so, hiked several of Ohio’s state parks as well as along the Niagara River in New York.

Versa and I checking out an Ohio hiking trail.

As an introvert, hiking is a natural fit and I would describe a perfect day as one that includes a 10-15 mile hike with my dog, watching her chase wildlife, and seeing the sheer joy the simplest of moments bring my faithful sidekick.

But, the unintended byproduct of hiking is my exposure to the reality that there is no ‘Ohio miracle.’ This is true along much of Ohio’s southwestern portion where I live and to the east where I hike.

As I drive through these small Ohio towns heading to my hiking destinations many look like mine — with their gutted downtown regions filled with a handful of establishments that cater to the impoverished — tattoo parlors, vape shops, dollar stores, satellite churches — and empty storefronts.

I assess these towns and mine by looking at four things: the library, the post office, amenities and billboards. In impoverished regions libraries and post offices are neglected, amenities are rare or non-existent and the public service announcements reveal the town’s problems. (Recent PSA signs in Preble County show we’re trying to convince people not to smoke if pregnant.)

Billboards also tell a community’s religious flavor. Those traveling south through Preble County on U.S. 127 will be reminded to ‘repent’ if they want to be saved — and to ‘Stand with Israel.’

I also glance at the political social media page in the counties I visit to see if the public interacts with its political leaders. When I visit the Preble County Republican Facebook page, I notice less than 500 people follow it. We are a county of 40,000 residents with about 11,000 registered Republicans.

Social media memes also indicate local ideology. On the Preble County page I learn that — despite our small-government mentality — we need a political savior.

I Need A Hero

I read the local newspaper, occasionally listen to the audio of the Board of Commissioners meetings, comb through police reports, but this year I intentionally sought out a different audience to better understand my community. I took a job that put me shoulder-to-shoulder with community members who, for a variety of reasons, are ‘down on their luck.’

As I interact with this broader base of citizens, I’m seeking answers for our collective demise trying to comprehend our entrenched poverty. It’s an economic decline that coincidentally followed my lifespan since my father moved the family here during Preble’s financial peak.

As I observe and research, I also ask questions.

I want to know, for example, how a county that had $1.9 million dollars in new construction in 1969 ($12.6 million in today’s dollars) has become an entity where the ‘construction fee’ was recently increased (by a 2-1 vote) in a effort to offset a line item deficit. Based on the dissenting opinion, the change may be ineffective — and one of the reasons given for the increase — rising gas prices seems incorrect since gas is cheaper today than in 2006, the last time the fee was increased.

Most importantly, though, it’s a decision that may stall our (slowly) returning construction industry.

How did we go from ‘boom to bust’ in a generation or two?

I never intended to be interested in politics. I prefer hiking, it’s more serene.  But as an accidental political news junkie I now believe, much more strongly than before, in a bi-partisan approach to running the country or a county. Based on news clipping, the bipartisan era left Preble County during the Reagan years. From the 1980s on most of our county offices have been filled by GOP candidates who ran unopposed.

This lack of an opposing viewpoint moved us further to the Right.

In the past three decades the local GOP’s shift can be seen in how we treat our children. In the 1970s members of the Board of Commissioners raved about the new orphanage, colloquially known as the Children’s Home, as one of their greatest achievements.

About 30 years later, by a 2-1 vote, the board voted to shutter it under a rallying cry of fiscal responsibility and an overreliance on verbiage (‘there’s no orphans in the orphanage’) costing us 11 local jobs.

Today some board members can be heard during public meetings adding up the dollar amount the county spends to place our children in agencies outside the county.

We aren’t cheering anymore — apparently the kids are costing us $500,000 annually.

The Truth Will Set You Free

I have thick skin, and I’m okay with opposing viewpoints, but when I look at the local GOP Facebook page, the posts intrigue me. Some show a lack of political literacy. For example, the quote from Teddy Roosevelt, is pulled out of its historical context, naively suggesting that today’s terms of liberal and conservative have the same meaning as they did a century ago.

Although Roosevelt was a Republican, his views more closely aligned with today’s Democrat party — he ‘took on’ business and believed that government action was required to keep the economic playing field level. He also ran as an independent for the Progressive Party (taking a literal bullet on the campaign trail) and his political position was center-left. Roosevelt’s Progressive Party called for the ‘direct election of United States Senators by the people’ something Trump wants reversed.

Since Roosevelt is more closely aligned to liberalism in today’s definition of the term, it is also possible to interpret his words (like most quotes) deeper than the surface level (i.e. saying the truth — what is ‘really happening’ in a society — will anger a liberal because they will perceive it as unjust.)

When I came across the ‘cry baby’ graphic, the first thing I noticed, because of my copy-editor background, is the misspelling of protesters. Although, I would presume the image was design to ‘irritate a liberal’ — in light of the recent level of resistance to the ACA repeal the joke doesn’t work. Besides, dissension is a foundational requirement of a representative republic (just read some Thomas Jefferson). More importantly, when we, as a nation or community, get to the point that all must act, think and believe the same — we’ve lost what makes us unique and strong — our diversity. 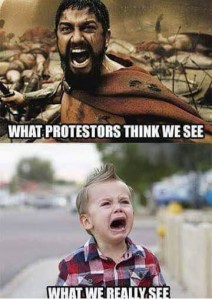 But my real complaint with the post is — it’s a really poor attempt at humor. Humor is a skill best left to comedians.

Here’s a much stronger, and better approach.

As anyone who follows politics knows Chris Christie has been dealing with backlash over his decision to shutter the state parks — especially after he was photographed on one of the beaches sans citizens. At a recent MLB game, as he tried to eat his nachos, Christie was harassed. Angered by the jeering, Christie got in the face of a Cubs fan and ‘let him have it.’

After viewing the video clip of the exchange, comedian John Fugelsang Tweeted,

And don’t ever again question Chris Christie’s humanity after seeing him cradle those nachos like a mother primate cradling its young.

Now, I don’t care who you are — or what your political angle is — that’s funny.

Spoiler Alert: Trump Won’t Save Us

Despite what my Congressman Warren Davidson Tweeted earlier this year — that all liberals want to do is add another program — as a liberal, I don’t want that. I want an effective, efficient government. I want leaders at the local, state and national level to solve problems, not engage in political warfare. I want a president that leads instead of one who Tweets and campaigns.

I want this because of what I see in Preble County. Here are three recent examples:

But one of our biggest problems here is what one local man called our harshness. ‘People just don’t give a shit about each other, anymore, ‘ he said. I agree. Even though some of our harshness may be a result of our mores and values — a lot of it is because we’re reaching a point where we just don’t like each other.

And social media is partially to blame.

Fellow citizens engaging in combativeness is undoubtedly irritating, but when the harshness is championed by a political party via social media it causes societal damage. It hinders progress and perpetuates pettiness.

Preble County’s challenges could be more adequately addressed if the Facebook platform was used for something beyond the national political game of meme ping-pong because, at the end of the day, no one, not even Trump, is going to save us.

3 thoughts on “Posting, Sharing Facebook Memes Not Solving Any Problems”