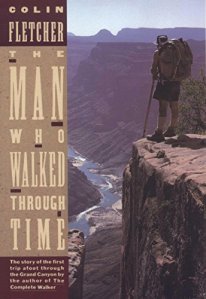 Although you can review my reading list to get a feel for what subjects I am interested in, here are three excellent reads I’ve recently finished:

The Man Who Walked Through Time: The Story of the First Trip Afoot Through the Grand Canyon by Colin Fletcher

Written in 1967 and re-released in 1987, The Man Who Walked Through Time is about the last (and possibly only) person to walk through the entire expanse of the Grand Canyon. The book is more than a travel memoir of Fletcher’s journey, it is also a reflection on the concept of time and the interconnectedness of all living things. Fletcher describes everything from the rock colors, beaver dams to a small gnat-like creature fighting with its peer to protect a small parcel of land. Very interesting read.

Science of the Magical: From the Holy Grail to Love Potions to Superpowers by Matt Kaplan

This is the second book I read while on vacation, Fletcher’s was the first. In this book, Kaplan takes a look at various common and not-so-common myths from early civilizations and puts them through the scientific process to see if there is an element of truth behind the myth. What he uncovers is, in some cases, there is.  Even though the early civilization may not have understood the why behind their action, they were often correct on the what. The science Kaplan reveals is intriguing and entertaining.

Dark Money: The Hidden History of the Billionaires Behind the Rise of the Radical Right by Jane Mayer

If, like me, you are interested in how America’s political right became so unwilling to compromise, Dark Money offers some insight. Most of us, I presume, have accepted the reality that money influences our elections, but what Mayer does is painstakingly unravel the electronic money trail of donations largely hidden from public scrutiny. The book focuses on the Koch brothers and how their billions is pushing an agenda on an unsuspecting public.

How Long Are The Books?

The first book is a fairly short while Dark Money is long. The second book falls somewhere in between. Fletcher’s book is an excellent candidate for a weekend read.

Categories: Books I have read