‘Giant of the Senate’ Infuses Hope, Humor Into Our Collective Political Nightmare

Posted on August 25, 2017 by CharlieClaywell 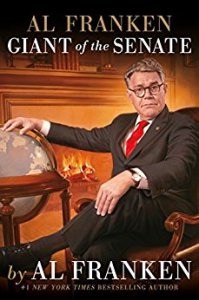 Al Franken, author of Al Franken, Giant of the Senate, is currently serving his second term as U.S. Senator from Minnesota. He is a multi-talented man who entered politics in 2008 after more than 30 years as a satirical writer and comedian.

This is his seventh book.

In Giant, Franken does the impossible — he turns our current political mess into an enjoyable story — one that even offers some glimmers of hope. This is especially true in the way he ends the book — written after Trump’s inauguration and Trump’s slew of race-baiting and immigrant-hating comments. Franken tells the story of some of the Somali refugees that reside in Minnesota — showing how they easily assimilated into the various communities, bringing with them a strong desire to thrive.

But, before the Somali stories of hope (and others sprinkled throughout the book), Franken offers a very realistic view of what its like to be a U.S. Senator. He details his recount in 2008, the money-grubbing members of Congress do to remain in office, and the various tactics he used on the campaign trail to throw off the GOP tracker.

The book, though, also shows the difficulty legislators face if they truly want to do their job and legislate. One telling example was his desire, after meeting with a vet suffering from PTSD, to get more service dogs paired with veterans. Franken, after researching the concept (or as he will readily admit, reading the research provided by his staff) sponsors a bill to fund broader research. Although the bill was passed relatively quickly in his political career, the research is just now being conducted because of all the various agencies involved and some false starts when the project launched.

Franken, who made a name for himself before entering politics by taking on GOP politicians, writing books making fun of Rush Limbaugh, Bill O’Reilly and George W. Bush, had to put his humor on hold when he entered the Senate. And, his approach in politics, for the most part, is considerably different than his comedy. It’s more workhorse and less showboat. But, that does not mean he shies away from calling out the worst of the political bunch — like Ted Cruz and other members of the Tea Party.

He reserves some very good one-liners for them.

Franken, a very well read Harvard graduate, is a deep thinker and strategist. Although Giant is an easy read, Franken does explain, in depth, some of the complicated programs — like the Affordable Care Act — with enough detail that a lay person can understand the logic of the legislation.

But one of the concepts that resonated with me was not Franken’s — but rather a writer he quotes, Jonathon Rauch.

Writing about our current political mess, Rauch states that many Americans just do not get politics and, in an effort to understand it, lump all politicians into the same class — presuming that the fault in Washington is spread out evenly between parties. Rauch calls these people ‘politiphobes.’ And, Franken, quoting Rauch writes,

They see the contentious give-and-take of politics as distasteful. Specifically they believe that obvious, commonsense solutions to the country’s problems are out there for the plucking. The reason these obvious solutions are not enacted is that politicians are corrupt, or self-interested or addicted to unnecessary partisan feuding.

But as Franken explains, folks did not come to this position without assistance — and he is more than willing to explain who created the perception.

Rated: 5 out of 5. This is a very readable — and fun to read — book. It could serve as an entry-level book to those wanting to better understand our political system.

Categories: Books I have read, Politics

2 thoughts on “‘Giant of the Senate’ Infuses Hope, Humor Into Our Collective Political Nightmare”