Posted on January 22, 2018 by CharlieClaywell

One of the United States’ first acts of war, The War on Tripoli (1801-1805) is largely unknown. I became interested in it because my hometown, and county, are named after some of the conflict’s key players. It was the country’s first significant win at sea and the founder of Eaton, Ohio — William Bruce — used the patriotic fervor to get a county created.

As noted in the 1915 History of Preble County, Ohio,

William Bruce proposed a county eighteen by twenty-four miles, which should be called Preble, after Commodore Preble, and that his town should be called Eaton, after Gen. William Eaton, the two great naval and land heroes of the United States war with the pirates of Algiers and Tripoli. He did not forget to call attention to the fact that he had named the principal streets Barron, Somers, Wadsworth and Decatur, after other heroes of that war. In this way, Mr. Bruce succeeded in getting at least an interested hearing (from those opposed to the county’s creation)…

Jefferson and the Tripoli Pirates: The Forgotten War That Changed American History by Brian Kilmeade and Don Yaeger is a short, but lively, account of the conflict. Besides the key players mentioned above, the story weaves in the actions of president Thomas Jefferson, Secretary of State Thomas Madison and vice-president John Adams.

The conflict arose as U.S. ships attempted to sail in the Mediterean area. As they reach the Middle East (Benghazi was a problem even then) they were only permitted free passage if they paid a tribute. The fledging country could not afford the ‘fee’ so eventually U.S. ships, and the sailors, were captured and held prisoner. 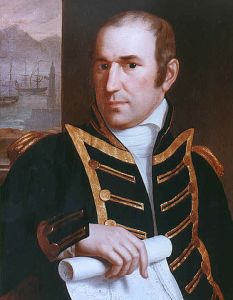 Six navy ships have been named after Commodore Edward Preble. The most recent in 2002.

What unfolds next is a series of negotiating attempts, but they ultimately fail, so Preble, Eaton and Stephen Decatur engage in various acts of war to subdue the enemy. One of the most fierce battles involves Decatur who, to avoid detection, boarded a ship with his men armed only with knives and swords. They were able to surprise the enemy and keep the noise of gunfire to a minimum.

Preble was also successful in destroying a captured U.S. ship so the enemy could not use it in acts of war against the United States.

Was It A Holy War?

The only downside to the work is the attempt by the authors to frame the conflict as a holy war of Christianity versus Islam — an easily disputed position. A couple examples of this can be seen where the authors state that Jefferson regulated the Koran to his bookshelf filled with Greek mythology. Although the statement is undoubtedly true, the Bible would be on the same shelf — a fact omitted by the authors. Jefferson rewrote the Bible and did not believe Jesus was the son of God. He also said the miracles in the Bible belonged on the ‘dunghill.’

Another example of the ‘holy war’ bias can be seen in the terminology used to described the Muslims — pirates. However, when referring to Preble’s earlier career as a pirate the authors use the term privateer. Pirating was a widespread form of war, and business, in the pre- and post-colonial years, as anyone who has spent any time along the U.S. coastline knows.

My Rating 4 out of 5. Even with the pro-Christianity revisionism, the book does an excellent job of telling the story of a relatively small handful of men, who overcame significant odds, to uphold their country’s honor while giving the nation its much-needed freedom of the seas.