Posted on March 8, 2018 by CharlieClaywell 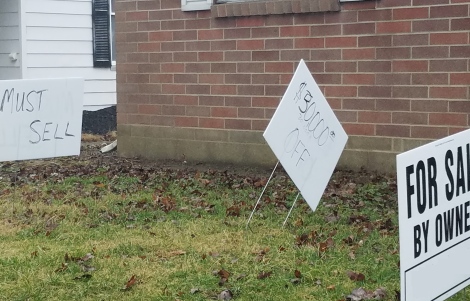 For sale signs, including $50,000 off, adorn lawn of Preble County home.

If you can only read two chapters in Ratf**cked: Why Your Vote Doesn’t Count by David Daley, start with the short chapter on Mapitude. It will give you a feel for how easy it is to manipulate our democracy. You will begin to understand what GOP operative Karl Rove knew years ago — whoever controls redistricting controls the country. Then read the chapter, Iowa, to see how competitive districts can be created allowing the best candidate to win (okay, except for Rep. Steve King, his district is the only automatic win in the state — so even Iowa has not perfected the task.).

As the book notes, the software program Maptitude comes with all the expected Census data — and when election maps are imported — it creates a powerful tool. That, in and of itself, though is not new, it’s just more precise and easier to manipulate due to computer technology, but the program also includes marketing type data — similar to online tracking ads — that enable map makers to project expected voting patterns with increasing accuracy because

…you can create an index that bounds enough of the right people, in the right way, to guarantee a result throughout the decade, no matter the overall direction of the electorate. In states such as Florida, Ohio, Wisconsin, and North Carolina, partisan mapmakers used complicated indexes like this with the intention of drawing not only as many Republican seats as they could, but seats that would remain reliably Republican even in an off-year for the party.

As an Ohioan whose U.S. Congressional vote has been disenfranchised, I am well aware of the downside that the unethical redistricting maps has caused. For starters, it created an environment that gave rise to the Freedom Caucus, which has at least two Ohio members (including Warren Davidson who presides over Ohio’s 8th Congressional District where I live). The Freedom Caucus does not have a reason to compromise (which the book does discuss). This unwillingness to compromise adds to the partisanship destroying Congress — at the expense of small towns like mine which are economically deprived and filled with a tainted labor pool due to our overly-aggressive approach to drug addiction. No solutions exist at the local level and no help is offered from the state or federal level. So small communities, like Eaton, Ohio, falter while Davidson and Freedom Caucus members push an anti-safety net agenda in line with what groups like Club for Growth want instead of what constituents need.

Although courts are now pushing back against the partisan gerrymandering, the average voter fails to understand that political operatives have more power than them. These operatives seek ways to manipulate the system to keep their party in power. The book looks at some of the key states where gerrymandering has impacted the nation. These include:

Daley dedicates a chapter to each of the states, interviewing and reporting on the key mapmakers in each. Of course, this could become very dry material so he mixes it up with non-state chapters.

Even though gerrymandering is not a subject most Americans care to study, the book is written in laymen terms so the casual reader can understand how it eliminates their vote. For political operatives, the American voting system is just a game of chess, complete with intense, well-thought out strategies, to control the process. The end result, when the system is not seen as fair, is a disinterested public manipulated into accepting a party’s agenda, even when the agenda does not represent what the majority of Americans want.

Ohio is a fairly evenly divided state — which is why we are considered a swing state — but, due to gerrymandering, 12 of our 16 U.S. Congressmen are GOP. And, as the book points out, when the 2010 redistricting campaign was underway in Ohio, the GOP worked hard to keep the public out of the process. Ohio state representative Kathleen Clyde, a Democrat currently campaigning for Ohio Secretary of State, interviewed in the book, comments on how the map-drawing process was handled in Ohio. Clyde notes two tactics used by the GOP, the majority party in state offices, in 2010.

They do that on purpose, too. Chaos, confusion, trying to make government look incompetent. It’s a very cynical approach designed to keep people from having faith in their government and wanting to participate in the electoral process. When less people turn out, Republicans do better. Especially in Ohio.

For non-political junkies, the 2010 GOP REDMAP strategy may come as a surprise which, again, is to be expected due to the complicated nature of Congressional districts. Since the book is critiquing the tactic, many of the counterarguments provided are from left-leaning individuals who feel a representative democracy should, well, be representative of the population.

As Mark Sailing, resident fellow at Cleveland State University’s Levin College of Affairs, notes a level of hypocrisy from those who believe in limited government interference.

People on the right complain about big government taking away our rights. Yet the most fundamental right of a democracy, the right to have your vote count, these same people don’t seem to be worried about it. It strikes me as insane.

In order to make the book more publically accessible asterisks were used in the title. Ratfuck is a Washington D.C. term for political sabotage. If one watches shows like Veep, they learn that D.C. is filled with people who love to use a lot of ‘colorful metaphors.’

Rating 5/5. This is an excellent, easy-to-read, primer on gerrymandering and why, due to technological advances, gerrymandering is a legitimate threat to democracy.