Posted on August 6, 2018 by CharlieClaywell 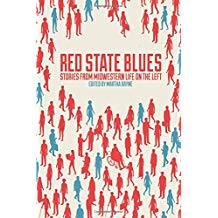 I have grown to appreciate the various small, independent publishing houses and authors that have spoken their truth in the age of Trump. Belt Publishing is one I especially enjoy. They published What You Are Getting Wrong About Appalachia which is a much more balanced view of the region than Hillbilly Elegy.

Their latest book I read is Red State Blues: Stories from Midwestern Life on the Left. The book is divided into five sections and contains about 25 essays. The essays are written by people from a wide range of backgrounds and are intriguing looks at the communities they represent. There are stories from immigrants and first-generation Americans, African Americans, college students, activists and reporters. The most well-known name (to me) was Sarah Kendzior, a Missouri reporter (and author of The View from Flyover Country) who has been uncannily accurate in her predictions about the Trump administration.

In her essay, The ‘Other Forgotten People’: Feeling Blue in Missouri, she opens with her attendance at a Palo Alto, California conference, ‘where the average home sells for three million dollars.’

“That’s would be two million, eight hundred and seventy thousand more than the average home sells for where I live, in St. Louis, Missouri: a struggling, blue city in a once purple, suddenly bright red state.”

This direct approach to the problems — like wealth inequity — is just one of the attributes of Kendzior’s writing I find appealing. In the essay she exposes the rage that many, who feel left behind, feel. She notes, though, that anger is intensified when the forgotten are morphed into ‘white, male conservative manual laborers.’

“It is a terrible thing to be in pain and ignored — as a place, as an individual. It is perhaps worse to finally be recognized, but only as a symbol — to be given a mask and told that it is your face.”

Her quote, for me, summarizes what each of the essays attempt to do — remove the mask and show what is beneath the surface.

An essay, written by Mark V. Reynolds, hit very close to home. Reynolds writes about Yellow Springs, Ohio (about 45 minutes from my residence), known locally for its laid-back atmosphere, bike trails and progressive politics (not to mention its most famous resident Dave Chappelle). The town also has a rich Civil Rights history. Coretta Scott King graduated from Antioch College in Yellow Springs, and two of the three Civil Rights workers killed in Philadelphia, Mississippi in 1964 were students at Antioch.

But, the essay centers around an incident that made the local news a few years ago during the village-wide New Year’s eve celebration. The event has been held in the town’s center for decades and, after the ‘ball drops’ the crowd disperses without incident.

A few years ago, though, the event was marred when white officers ‘roughed up’ a black man.

After the incident, the progressive town was forced to re-examine itself — and the essay does an excellent job retelling the story, not as a news event, but as a reminder that race relations are abysmal in the United States.

Say No To ICE

The essay about Elkhart, Indiana, though, was my favorite — because of the story it told. It’s the tale of an unlikely pair taking on the private prison industry (CoreCivic). The organization was attempting to build a civil detention facility for ICE in Elkhart. The pair, a 50-something professor and a 22-year-old female (the eldest child of Mexican immigrants) went to work educating the community on the downsides of bringing the facility to the region which has a significant Hispanic population. Eventually, the mayor of Elkhart, a Democrat, would post on Facebook:

“CoreCivic…would create jobs we don’t need at wages we don’t want. Any tax dollars generated by the project wouldn’t be enough to offset the long-lasting damage such a facility would do to our county — both in terms of perception and in terms of creating an unwanted unwelcoming reputation.”

The community succeeds in keeping the facility out of their town — proving Goliaths can be defeated.

Rated: 5 out of 5. Anyone who, like me, is a blue dot in an ocean of red, will find the book enlightening, thought-provoking, and occasionally humorous, but mostly it feels like you’re sitting down with 25 or so like-minded friends.

Categories: Books I have read