Posted on September 10, 2015 by CharlieClaywell 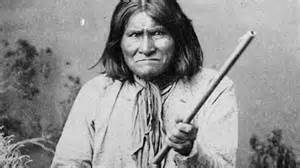 If you have ever watched any conspiracy or unexplained history shows, you have undoubtedly comes across stories about the secret society at Yale University — Skull and Bones. The society has been linked to numerous political figures, for example in the modern era, George W. Bush and John Kerry.

Although the story of the Skull and Bones society is interesting enough in and of itself, I only relay that as background information about the story of the missing skull of famous Native American Geronimo.

In 2007 ABC News reported on what allegedly took place.

The oft-told tale is that (George W.) Bush’s grandfather, Prescott Bush, and some of his buddies at Yale, dug up the grave of Apache chief Geronimo, removing his skull and femur and placing them in a glass case in the lobby of the Tomb, the headquarters of the university’s notorious Skull and Bones society back in 1917.

In 2009, descendants of Geronimo filed a lawsuit in federal court suing, the society, Yale University and the federal government. The article noted that the discovery of a letter from a club member describing the theft lent credibility of the allegations. But, Federal Judge Richard Roberts dismissed the lawsuit the following year, in 2010. The case was dismissed on some technicalities like — the government had not waived its right to be sued the lawsuit was built around a 2009 law which the judge said did not apply to the situation.

Posted on December 27, 2013 by CharlieClaywell

I watched some of the stories included in this book on TV. The book contains all the conspiracies one would expect to find, JFK’s murder, John Wilkes Booth (was he really captured) and some obscure ones like where is the White House cornerstone? But the one that pique my interest was the one about the American ‘Stonehenge,’ — the Georgia Guidestones.

The 10 guidelines or principles are inscribed in granite monuments that are nearly 20 feet tall. Besides the somewhat crytic tone of the rules is the fact that the public at large has few to no clues about who financed this massive undertaking. The guides were placed in a northeast rural Georgia — in what is referred to as a safe zone (should the apocolypse occur). For the most part the guides are benign-sounding — although the topmost guide suggests a huge reduction in human population.

There are many theories about what the stones represent — everything from Satanic groups wanting a New World Order to a sign of the times — the fear the Cold War would wipe out humanity. Regardless, if nothing else they are definitely an intriguing modern mystery.