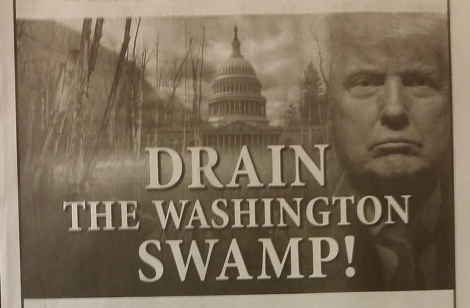 There’s got to be a better way — Frank Constanza

Decades ago as a factory worker I was trained in ‘Root Cause Analysis.’ I’m no longer sure if that’s a real thing — or just an idea created by the company, but the concept was sound. When we created product that was scrapped due to error — the goal of RCA was to find the original source of the mistake. This often meant poring over reams of data (yes it was on paper) and zeroing in on when the initial error occurred.

If we could only do that with politics.

One of the best books that examines how this ‘first mistake’ happened in our current political debacle — the one that placed an egotistical, pampered billionaire in the White House — is Insane Clown President. The book takes a hard look at the media and the voting public. It examines the rise of the paranoid and fringe beliefs of an ever-widening swath of Americans coupled with the media’s for-profit business model that puts ratings over substance. Insane Clown President, unlike Hillbilly Elegy (which is touted as the book to read to understand the Trump win), actually does shed light on how it happened. The gist: American vote against, not for, candidates.

I mention the book because that is also why the AHCA failed — the MO of a small group of men, with a disproportional amount of power, inside the House of Representatives — obstruct instead of negotiate. Now, let me be clear. I’m glad the AHCA failed. Even though I am not a Trump supporter, most of my community is — and many would have been financially damaged if it were enacted into law. We are a poor region of the country and another hard financial blow may have been too much for many here to absorb.

But, I’ll admit, in a broader sense, some things amaze me. I’m amazed that in ‘the greatest country’ in 2017 we’re still trying to resolve healthcare. I’m amazed that political powers fight hard to make healthcare inaccessible — especially for the poor and aged. I’m also amazed that after seven years of promising to repeal and replace — and 15-18 months of Trump’s blathering rhetoric that when push came to shove, the Party was impotent. I feel like if this is one of those ‘big issues’ as a Party you might want to, I don’t know, plan ahead and have something that will pass.

But mostly I’m amazed at the resistance some Americans have to affordable healthcare. Personally, I agree with comedian Allana Harkin, who in a moment of candid honesty, summed it up very nicely. She said:

I honestly cannot understand why Americans wouldn’t want every single citizen to have access to proper healthcare. It’s called humanity.

Building A Caucus The Old Fashion Way — With Big Money

Although Trump called the New York Times and blamed the Democrats for the House’s inability to garner enough votes to pass the AHCA, it was his Party’s incompetence that halted the legislation. This was, in large part, because of the Freedom Caucus — which has two Ohio members, including my Congressman Warren Davidson.

Davidson, whose previous political experience was Township Trustee in Miami County, leapfrogged past other experienced legislators in 2016 and won the seat held by former Speaker of the House John Boehner (who was forced out by the Freedom Caucus). Davidson was able to leapfrogged to the top of the political pile possibly because he was competing against more than a dozen GOP contenders — and only needed 33 percent of the vote to win — or maybe because the Club for Growth — and Freedom Caucus member Jim Jordan — took an interest in him.

One thing is certain, a lot of money was spent on the race.

Regardless of why or how he landed the job, the position should be secure because of Ohio’s gerrymandered districts. In Ohio, we haven’t had competitive districts for decades.

How Ohio’s Gerrymandered System Affects You

If this gerrymandering only affected Ohio the solution for people, like myself, who do not agree with gerrymandering could move. After all that seems to be the go-to answer in my ‘neck of the woods’ (love it or leave it). But, it affects the entire nation so unless you are incline to move to Canada — or across the southern border before the beautiful wall is built — you are stuck with Ohio’s unethical approach to Congressional map creation.

As Thomas Suddes notes in his ‘brief history of Ohio gerrymandering‘ the rigged game became even more rigged since the 1980s. After the 2000 Census it lurched into full-blown Party over Country mode. To see just how rigged the game has become with Ohio Congressional Districts, compare the stats between Trump and Ronald Reagan. They both carried the state with basically the same percentage. Trump captured 51.7 percent of the vote while Reagan carried it in 1980 with 51.5 percent. But what changed — and created the current gridlock — is the number of Republicans and Democrats Ohio sent to Congress.

The viewpoints of Ohio’s population did not shift significantly in the two elections, but who their representatives are most certainly did because the core of the system had been altered to put Party over Country. And, with Ohio’s noncompetitive districts locked in place for the foreseeable future, the rest of the country should not expect much cooperation from our elected officials. They can only be replaced — in a primary — by someone more radical.

So, fellow Americans, you get to live with the mess we created.

But Will Trump Get Mad?

I’m starting to fear that Ohio will get on the — well, since I try to keep my posts PG — let’s call it the Naughty List. For starters we have governor John Kasich who is a Trump critic. Now, we have two U.S. Congressmen refusing to kowtow to the wishes of our Reality-TV leader. Besides hurting the man’s ego — not to mention the show’s ratings — Trump is allegedly known to go after his enemies. But, despite the policy disagreement, Davidson and fellow Freedom Caucus member Mark Meadows seem to think Trump is still on board with demolishing the ACA. Meadows reportedly said,

To put a stake in it today would not be accurate.

Meadows may be right, the president may simply sabotage the program (putting ego over country). Davidson though, in his response went with a modified compliment sandwich deflecting any personal responsibility for the legislative failure. On Saturday, he noted on his website,

I appreciate the willingness of President Donald Trump to work together throughout this process. I was stunned to see as we made progress toward repealing Obamacare’s one-size fits all approach, others lost their resolve.

The president, in his early Sunday morning excretion on Twitter had this to say,

Democrats are smiling in D.C. that the Freedom Caucus, with the help of Club For Growth and Heritage, have saved Planned Parenthood & Ocare!

All the hoopla apparently proved to be too much for one Freedom Caucus member. On Sunday, Rep. Ted Poe (Texas) resigned from the Caucus.

As I was researching the various things Davidson has said and done in his short time in office, I noticed he’s also a member of the 2nd Amendment Caucus. It feels like a safe bet for him being from a part of the country outsiders derisively call Murica. We definitely love our guns. And, I’ll admit I’d have a hard time imagining Boehner with a gun — some wine, a cigarette and maybe an off-colored barroom joke — but not a gun.

Or maybe Amendments are like Bible verses, you can only have one favorite.

If Ohio members of the Freedom Caucus want to do something for the citizens back home to start that winning streak Trump promised the country — fix the Internet speed. It’s abysmal. Ohio ranks 47th in the country. D.C. is 1st.