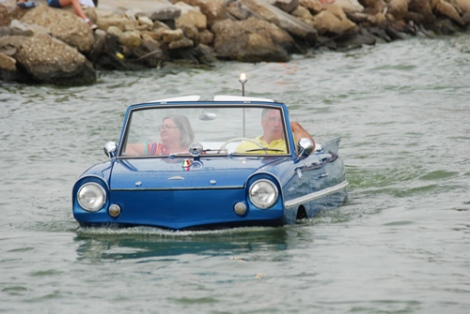 An Amphicar cruises in St. Mary’s Lake during the 2014 Lake Festival in Celina, Ohio.

Lake Festival in Celina, Ohio is a free event that has a fair-like quality to it — with plenty of deep-fried food — and is held on the banks of St. Mary’s Lake each year in July. This year’s event was held July 25-27, and included the Friday evening ‘Splash Inn’ where Amphicars from California, Michigan to Ohio drove down a wooden dock, splashing into boat mode before navigating through an tunnel and out onto St. Mary’s Lake. | View Photos

Since relatively few cars made it into the U.S. only a handful of the cars are at the event (maybe 15) which is why the event is extra special because it is one of the few times you will see an Amphicar  — especially one operating in boat mode.

Between 1961 and 1967 slightly more than 3,000 of the vehicles were imported into the United States. The vehicle’s model number 770 comes from the fact that the car can do 7 knots on water and 70 mph on land. This was accomplished with a 43-hp Triumph engine.

Amphicars hold the distinction of being the only civilian amphibious passenger automobile ever to be mass produced.

President Lyndon B. Johnson owned a Lagoon Blue version and used the vehicle to prank an unsuspecting passenger by telling the passenger that the brakes weren’t working as he ‘crashed’ the car into a lake.

To learn more about the Amphicar visit:

Amphicars: This is an enthusiast site and offers recent news, history of the vehicle, links to vehicles for sale and upcoming events associated with the Amphicar.

The International Amphicar Owners Club: Click on this link to find upcoming ‘swim-ins’ across the United States.

eBay: Occassionally a few will be listed for sale on the eBay Motors website.