Posted on October 30, 2014 by CharlieClaywell 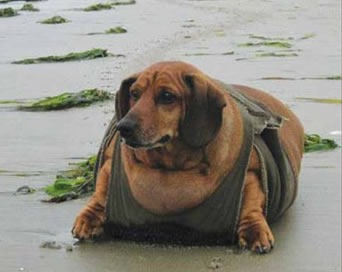 So I was sitting in the doctor’s office with Molly while she was waiting to get a vaccination — and I noticed the cover of a magazine with a picture of the most obese dachshund I have ever seen.

The poor dog looked like it had swallowed a large helium balloon. I won’t rewrite the story, but the dog became overweight by the well-intentioned actions of its elderly owners — and it took more than two years (and plastic surgery to remove the extra skin — which weighed more than two pounds) to get the dog healthy again.

Here’s how the woman who helped nurse the dog back to a healthy weight described seeing the dog for the first time.

“He was in the back of a small SUV and took up most of the space,” she recalls. “It was shocking to see his size.”

You can read the complete story here.