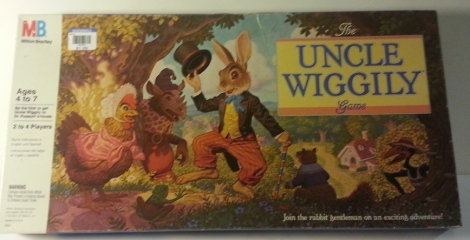 According to Wikipedia, Uncle Wiggily  — along with Candy Land — is considered a classic juvenile American board game. Oddly enough for me, and even for my daughter, we never played the game. In my childhood — and my daughter’s — Monopoly was the game of choice, although my daughter did introduce me to Risk and Stratego.

Uncle Wiggily is based on a children’s story character created in 1910 by Howard R. Garis. The board game was introduced by the Milton Bradley Company in 1916 and the company revised the game at least three times: 1923, 1949, and 1955. The game is now owned by Hasbro.

During the early years (before 1930) a few variations of the game were also created like Put a Hat on Uncle Wiggily.

Description
The game is designed for 2-4 players and for children ages 4 and older. It is a game of chance so there isn’t a strategy per se because players roll the dice and draw cards trying to be the first to arrive at Dr. Possum’s house.

Value
I own the 1988 Milton Bradley version which sells for around $30 in sealed MIB condition. The more valuable versions of the game are the one-off versions like Put a Hat on Uncle Wiggily, the pre-1930 versions or even 1950s and 1960s versions in nice condition. These versions can sell for $30-$60 based on year produced and condition of game.

Resources
To learn more about the game, its various versions and their values visit BoardGameGeek or the Elliott Avedon Virtual Museum of Games.