Family History: Bennie Lewis’ Locker Sheds Light On What Was Important To Him

Posted on February 18, 2015 by CharlieClaywell 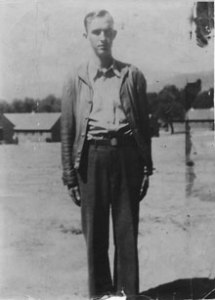 Bennie Lewis, a younger brother of my paternal grandmother. He died at the age of 25 in a logging accident.

I have previously posted about Bennie Lewis, my paternal grandmother’s brother, and wrote about how his life was tragically cut short while working in a Civilian Conservation Camp in Idaho. The post includes the letter Bennie wrote his mother one week before his death.

But to learn more about Bennie’s accident, I contacted the National Archives Records Administration in St. Louis and purchased a copy of his file. Contents of the file offer additional information about the accident because it contains the eyewitness accounts.

Bennie’s main duty in the camp at the time of his death was Kitchen Police — or KP duty as it’s often called, but he was also a truck driver. On the Friday when Bennie died, he was working with two other men, felling trees. They had been asked by their supervisor to cut dry lumber into four to eight foot sections — load the lumber into a truck and haul it back to the main camp a couple miles away.

The three men sawed in pairs. That is, two men would saw while the third man would mark the trees — rotating the roles so no one was stuck with only sawing. At the time of the accident — around 2:50 that Friday afternoon — it was Bennie’s turn to mark the trees. A witnesses who was sitting about 200 feet away — taking a break and talking with some other members of the camp — describes what he saw.

“…I happened to look up where the boys were cutting the last tree and just then the tree fell on Bennie. After it fell I could not move for about half a minute and then I ran up to see if I could do anything about it.”

Another witness reported hearing a man yell ‘look out’ as he saw the dead tree falling. The men sawing the tree were able to jump back out of the way, Bennie, unfortunately, was not.

In the follow-up reports that were filed after his death, the tree that killed Bennie was described as a dead 8-inch diameter Red Fir — about 40 foot long that uprooted as it fell.

In less than two hours of his death, all of Bennie’s personal effects were locked up and inventoried so the items could be sent to his family. This is what was found in his foot locker:

Bennie, who had only been with the program about eight months when he died, received high marks for his work ethic and personality while in the CCC — being described by his supervisor in an earlier evaluation as ‘courteous and willing to work.’

Red Tape
After Bennie death, his parents were awarded a monthly settlement of $8.40 to be paid for a period of eight years — or just a little over $800. For those who believe excessive red tape is a modern invention of the government — apparently not. In order to receive the monthly payment (which was actually sent in a bi-monthly $4.20 check), his parents were required to resubmit the claim four times a year (on the first day of January, April, July and October) and the claim had to be ‘acknowledged’ before the local postmaster and then forwarded to the Commission.

Bennie was the second member of his family to die at a young age. When Bennie was around 12 or 13, his youngest brother, Earl, died about a week after his 10th birthday.