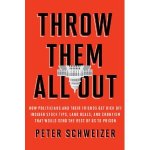 In the introduction to Throw Them All Out

“How is it that politicians manage to enter office with relatively meager resources and often retire rich?”

He answers that question by exposing how politicians from both parties are milking the legislative cash cow. Schweizer dives into a mountain of financial data and explains how, by guiding and exploiting the legislative process, politicians (who he calls the Permanent Political Class), are cashing in on enormous profit.

All of this, of course, is unfolding in an environment where the common, everyday American is unaware of the depth of the political thievery and depravity — or even more often — where everyday Americans are caught up in some liberal versus conservative argument. As the public spews its argument for or against a litany of wedge issues — immigration, gun rights, the Affordable Care Act — politicians and lobbyists tuck incentives, for themselves and their cronies, into the thousand-page documents that become law.

The cronies and politicians win, while the public-at-large loses.

The beauty of the book is if you are an Obama hater, there is significance evidence of the cronyism in the Affordable Care Act. If your hatred extends to the Democrat Party, you will find details of former House Speaker Nancy’s Pelosi’s uncanny ability to gain access to much-coveted invitation-only IPOs which have made her and her husband millions of dollar.

Plenty of GOP legislators are milking the system as well. My Congressman, and current House Speaker John Boehner, was snapping up stocks that he knew would benefit from Obamacare while publically decrying the ‘business-killing’ qualities of the legislation. He also found ways to personally benefit from TARP — the multi-billion dollar bailout of Wall Street — despite writing an op-ed piece stating he wished he hadn’t voted for it.

But, for me, one of the most interesting sections of the book is the chapter – Warren Buffet: Baptist and Bootlegger. Schweizer opens the chapter by explaining how opposing forces often benefit from the same legislation. He explains how two polar opposite groups — the Baptists and bootleggers –  were supporting Prohibition legislation. The Baptists supported it because of their belief that alcohol was evil while bootleggers wanted Prohibition because they stood to profit immensely from the illegal sale of alcohol.

So, as Schweizer explains, during the $700 billion dollar bailout of Wall Street — paid for by taxpayers like you and me — Buffet was publically taking on the persona of a fiscally-wise grandfather, saying ‘I’m not brave enough to try to influence Congress.’ Of course, all the while Buffet was pushing for the bailout due to his huge financial investment – and continued investment during the legislative process — of the Wall Street banking firms. In fact, Buffet sweetened his deal by negotiating above-standard dividend returns on the failing institutions because he knew a bailout was coming and he knew he stood to make billions off the deal.

Despite the volume of financial data, the book is a relatively quick read. Filled with plenty of examples, statistics and even a few charts, the book is just large enough to drive home its point: The rules that govern the lives of politicians and the rules the rest of us are governed by are vastly different. As the author points out,

… the Permanent Political Class has clearly figured out how to extract wealth from the rest of us based solely on their position and proximity to power.

Rated 5 out of 5. Quick read, plenty of statistics to back up the author’s statements and, for the most part, nonpartisan.

Categories: Books I have read | Tags: politics as usual