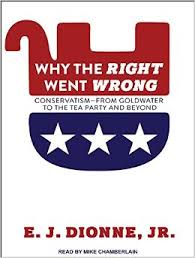 In Why the Right Went Wrong: Conservatism–From Goldwater to the Tea Party and Beyond. E.J. Dionne Jr, a Democrat writer and columnist, looks at how the conservative movement has shifted increasingly to the right since the 1950s.

Written in chronological order, the book starts with the failed 1964 presidential campaign of Barry Goldwater and ends in the 2015 segment of the 2016 presidential race. Interspersed throughout the book are observations from the 50s – specifically the presidency of Dwight D. Eisenhower, the McCarthy Red Scare era, and the work of William Buckley Jr. (the National Review) and even fringe groups like the John Burch Society.

His second strongest skill is to present the information is a low-key tone – almost in a conversational way so that the reader does not feel like an opinion is being ‘shoved down their throat.’

Make no mistake though, he is a liberal and does not try to hide it. However, his approach as a dispassionate reporter should enable even the most conservative voter to read the book and at least walk away with a better understanding of how their movement has shifted to more radical viewpoints – and how this shift may very well cost the Party its power.

For a casual reader, who may view politics as a necessary evil to be endured in American society, the book offers clever insights and backstories of the various political figures they watch on the news. Politicians like Richard Nixon, Ronald Reagan, George H.W. Bush, George W. Bush, Mitt Romney and even Donald Trump. These readers will understand more completely how each of these figures positively or negatively impacted the Party’s future.

For me, some of the most interesting content centered on Ronald Reagan, a disciple of William Buckley Jr., and the conservative movement’s shining star. Although, I was not old enough to vote when Reagan defeated president Jimmy Carter, I remember vividly how it was an electoral landslide – which I presumed meant it was a popular vote landslide as well. It turns out I was wrong; Reagan captured 50.8 percent of the popular vote. As Dionne, points out,

Reagan was elected not because he turned the whole country conservative, but because he persuaded enough swing voters frustrated over stagflation, the Iranian hostage crisis, and the seemingly (and misleading) rising power of the Soviet Union that he was not the conservative ideologue of old. Reagan played down his more right-wing positions – deflecting for example, Carter’s attack on his past opposition to Medicare with the most memorable line of their only debate: “There you go again.”

Rated 5 out of 5. The book is well organized, non-combatant in tone and will elevate the political knowledge of any American. Filled with stories, stats and opinions, Why the Right went Wrong will educate anyone who desires to become a more knowledgeable voter.

Categories: Books I have read, Politics