Posted on March 1, 2018 by CharlieClaywell 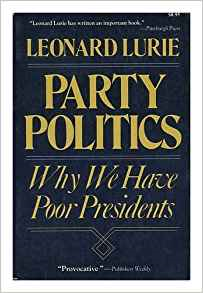 Published in 1980 Party Politics: Why We Have Poor Presidents by Leonard Lurie provides a strong argument why our Two Party political system does not work — and, according to the author, was never the intent of the Founding Fathers.

The book begins with why the Founding Fathers were opposed to a political party approach of governance and ends with suggestions on how to get back to a more democratic system of electing our presidents.

Those chapters are for people who enjoy political theory — the nuts and bolts of political machination — but it’s the chapters squeezed between the theories that more people will enjoy. These chapters are crammed full of succinct political analysis for each president from George Washington to Richard Nixon.

And, the chapters have enough sass, rumor, gossip and history to pull in even the casual reader.

With the exception of a few presidents, the author is not impressed with those we’ve elected. He is even less impressed with the political machinery that placed them in office. So even a president as popular as Dwight D. Eisenhower fails under Lurie’s microscopic examination. He notes Eisenhower’s political indifference, wasted opportunities, obsession with golf and the president’s inability to take on Party powers to remove Richard Nixon from his ticket. Lurie also notes,

Eisenhower represented the replacement of substance with image — the president as a symbol, the presidency as a reward. The party philosophy of winning at any cost had resulted in mere popularity becoming a qualification for nomination.

A feeling that resonates today with the current administration.

By the end of first chapter, it’s apparent that Lurie is well read and very knowledgeable. His command of U.S. political history is stunning. But, just as impressive as the obscure historical nuggets he pens are the quotes Lurie uses to open the chapters. For example, this quote from famed ACLU Lawyer Clarence Darrow:

When I was a boy I was told that anybody could become president. I’m beginning to believe.

As one reads, it does become obvious that few things have changed in the political scene — at least as far as the mechanics. One reoccurring theme is voter apathy. In the race against Republican Warren Harding and Democrat James Cox voter were so uninterested that less than 50 percent of them participated. A phenomenon repeated multiple times both before, and after, that election. But, as Lurie notes, this is not without some advantages.

Republican leaders had come to rely on the fact that vast numbers of voters saw little reason to make the effort necessary to record for themselves any candidates.

And, and one political operative from Harding’s team noted — people will take what they are given:

We live in a hard-boiled age. No man in this country is every called to the Presidency by the clamor of millions. No man is so great in our democratic society that his name excites the masses.

Harding consistently ranks as the worst U.S. president (until recently) and possibly the most interesting thing about his scandal-riddled presidency was his affair with fellow Ohioan Nan Briton — Briton alleged Harding fathered her child.

The most important theme of the book, though, is how the American public does not truly have a say in the presidency. This reality has been proven, and written about, by scores of theorists. But, as Lurie notes, one reason is the party nomination process which bypasses the average voter — by permitting a relatively small group of individuals to decide which candidates will seek the presidency. And, this works because

…people accept government, they obey rulers, precisely because as an unorganized mass they easily fall victim to the predators living within their midst.

As he discusses the Reconstruction Era, Lurie notes how the appeal to patriotism was strong enough to quell any decent American from supporting a Democrat — a Party that was involved in suppressing the Black vote in that era. But eliminating the Democrat vote did not bring out the best in the GOP he asserts, noting,

Without the fear of political opposition there was no need to provide decent candidates, or even candidates who projected the image of decency.

In our current age of hyper-gerrymandering, it almost feels like he is writing about today.

Rating 5 out of 5. I rarely review political books this highly simply because too many become weighted down in political theory. But, this book is a nice mix of political theory, historical facts, rumors, gossip and lively narrative. Lurie has also written two books on Richard Nixon.

Categories: Books I have read, My America