Broken Spirit: Leaving the Past Behind

[This is part of an ongoing series of what a rescued dog has taught me about life. Read entire series here.]

Leaving the Past Behind

Versa’s past is somewhat uneventful — which is her problem. She was brought to the pound as a pup with her sister (who I always presumed was named Vice — the first half of Vice Versa), but a strange thing happens to puppies inside kennels and rescues — they never learn how to be a pup. There is no fighting, tumbling, or chasing after their brothers and sisters– just a pen, food and daily exercise. It’s not the fault of the organization — but it’s a harsh reality — pups like Versa struggle with fear.

Fear aggression is most recognizable by a dog’s need to bark at anything new — situations, people — and the tendency to cower. When Versa first came home, she would quiver and bark whenever strangers came into our house. Even today, nearly nine months later, she barks at visitors until I can calm her down.

Although, fear aggresion cannot necessarily be cured — several things help — and they boiled down to the same idea — making Versa feel secure. Security lessens the pull of her past.

With Versa, I’m using the tried and tested approach of slow and steady. I take her to a local kennel every three or four weeks so she can interact with other dogs. I walk her a lot without a lease. She is learning she can run off and come back and everything is fine. When family and friends visit they feed her treats and she learns strangers don’t have to frighten her.

It’s working. Her demeanor is slowly changing. In recent weeks, she has approached family members, without being coaxed, and let them pet her.

We all have a past — my past included being bullied at school and in some ways just like Versa, limited socialization. But at some point, the past is just that — the past and you cannot allow it to dictate the present. You move forward, slow and steady, and find a way to come to terms with the pain and the mistakes.

And, eventually you learn, that starting another circle is just the cycle of life. 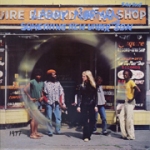 Something New Under the Son

Larry Norman was extremely influential in the creation of what is today known as CCM. He released his first Christian-themed album in the budding (non-existent) Jesus Rock genre in the late 60s. His four strongest albums are Only Visiting This Planet, So Long Ago the Garden, Upon This Rock and Something New Under the Son.