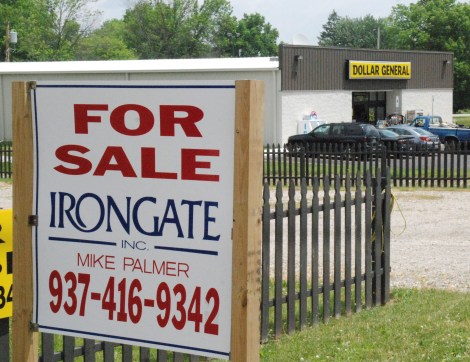 The county of 42,000 is home to at least six Dollar General stores.

Although, dollar stores are starting to feel the pressures of overgrowth and an improving economy — in places like Preble County where the average wage is less than $40,000 a year — there is still a need for discount stores.

In fact, according to Huffington Post, they are serving the secondary need of creating jobs.

“Retail salesperson” has become the most common occupation in America, with 4.3 million people working the country’s sales floors and registers. In down-and-out areas, particularly where manufacturing or energy jobs have vanished, dollar stores now hold some of the only work that’s available.

In Preble County, the discount stores are particularly interesting due to the ‘mom and pop’ stores replaced when national chains moved in.

In the county seat of Eaton, there are two Dollar General stores, a Family Dollar, a Wal-Mart and a Kmart in addition to CVS and Walgreens. When Wal-Mart came to Eaton some on city counsel opposed the store due to the existence of Kmart and a dying downtown area, but Wal-Mart in typical fashion showed up with attorneys and demands — and built on the north end of town.

Walgreens was built on the location of a family restaurant owned and CVS displaced an old tractor implement store. The family-owned Gary’s Pharmacy in Eaton ceased business once the national drug chains opened as did Landis Pharmacy in West Alexandria.

Dollar General tried its hand at a north location near Wal-Mart, but now that storefront inside the strip mall stands empty — adding to the inventory of empty buildings in the city — while a new Dollar General opened on the south end of town and another one opened near the center of town. Family Dollar is located in the former family-owned Miller’s grocery store and Lewisburg’s Dollar General is located in the former family-owned Brennan’s grocery store.

A Few of The Discount Stores in 8th Congressional District

Growing up in Preble County

I don’t want to give the impression that discount stores are new to the county, but national chains are. In my youth, Eaton had a family-owned five and dime store while West Alexandria and Lewisburg had family-owned variety stores, just to name a few.