‘Best Of Enemies’ — The 1968 Event That Launched Modern TV News

Posted on January 31, 2016 by CharlieClaywell

Getting an accurate source of information is difficult in the United States. Although news organizations seldom hide their political slant anymore parsing out the truth from the various agencies is, even for the most diligent viewer, a difficult task. Some even claim fact-checking sites are biased.

But it was a singular TV event that launched our modern world of pundit TV – the concept of bringing on two guests with opposing viewpoints onto a show — and then asking questions designed to create to lively debate. It makes for great TV since the guests are usually entertaining.

The beginning of this modern news approach is captured in the film Best of Enemies. The film is currently available on Netflix.

A Year Of Turmoil

The year is 1968 – one of the most critical, turning points in modern American history – and the players on the stage are two intellectual men – one from the left, author Gore Vidal, and one from the right, William Buckley Jr., founder and editor of the National Review. 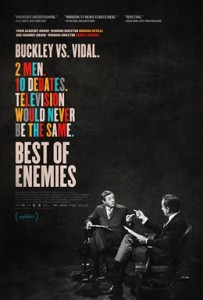 The film is built around a series of debates that ABC news held during the GOP and Democrat presidential conventions in 1968. ABC was the third ranking TV company in the country – and a very low-ranking third at best. Since they could not compete with CBS or NBC – they decided to abort the standard approach of gavel-to-gavel convention coverage and try something new. They invited Buckley and Vidal to commentate on the conventions. What unfolded on camera was the increasing disgust the men felt for each other.

If the film only covered the debates, it would quickly mire in a he said-he said event that most Americans have grown accustomed to. But the film also pulls in the events of 1968 – like the police brutality in Chicago and the changing rhetoric and language concerning race – and provides biographical sketches of the two men. Buckley, of course, largely through his publication is credited with creating the Ronald Reagan constituency while Vidal became one of the most provocative and successful novelists of his generation. Both men were well-connected with high ranking politicians including presidents. Both men viewed the other as the personification of everything that was wrong in the United States.

The climax of the film is the final debate between the two men. An exchange becomes very heated during a discussion concerning the police brutality in Chicago. The confrontation quickly moves from politics to personal when Vidal calls Buckley a crypto-Nazi and Buckley comes unglued. After calling Vidal a [expletive] queer Buckley threatens to punch Vidal. All of this unfolds on live TV – relatively tame by today’s standards.

The men continued to spar publically after the incident — both writing print pieces about the meltdown — and Buckley filed a defamation suit against Vidal over Vidal’s article. Vidal filed a countersuit. After the event, Buckley launched a successful TV show and Vidal continued to write — although his fame began to falter in the 1980s.

Who Should Watch It?

If you are not interested in political theory and the forces that create it, then don’t watch the film. However, if you are interested in how TV news became pundit-based, it’s worth watching. The film looks at how a ABS’s desire to improve ratings forever changed the way Americans received their news.

Although I am not a Buckley fan, I did feel that the film was slanted somewhat against him and his position. But, in the film’s defense, Buckley is not necessarily a likeable person. In live footage, he comes across as arrogant, conceited and, in general, very unpleasant with a condescending attitude. Vidal, on the other hand, in the live footage is more polished, but it did appear (I did not count minutes) that Vidal was given more time (via interviews) to expound on his belief that Buckley’s ideology was undermining and destroying the democratic process in America.