Deplorable And Proud Of It — Now’s There’s A Feather In Your Cap!

Posted on October 12, 2016 by CharlieClaywell

When Kramer, of Seinfeld fame, announces to his friends that he wants to ‘die with dignity,’ Elaine quips, ‘now there’s a feather in your cap,’ because achieving some things, well, just isn’t all that glorious. Neither is embracing slogans that are harmful to the country  — like ‘deplorable and proud of it.’

Deplorable and Proud of It

In my hometown, the GOP rents empty downtown storefronts each election cycle (there is never a shortage of options) for its victory center. This year the signage in the window includes the slogan “Deplorable and Proud of It” — an obvious reference to a quote from Democrat presidential candidate Hillary Clinton. The entire quote goes like this:

You know, to just be grossly generalistic, you could put half of Trump’s supporters into what I call the basket of deplorables. Right? The racist, sexist, homophobic, xenophobic, Islamophobic – you name it. And unfortunately there are people like that. And he has lifted them up. He has given voice to their websites that used to only have 11,000 people, now have 11 million. He tweets and retweets offensive, hateful, mean-spirited rhetoric.

Now some of those folks, they are irredeemable, but thankfully they are not America.

It is a quote that resonates with some Trump supporters — and smaller versions of the sign are sprinkled throughout Preble County. When individuals embrace the slogan, some may dismiss it as the opinion of the unenlightened in a country built upon Enlightenment principles, but when a political organization embraces it, it is problematic. It gives credence to undesirable mores and values.

When I see the sign inside the GOP Headquarters on Main Street in Eaton, Ohio I wonder which of the five attributes named by Clinton they are most proud of:

These are traits that, by and large, we teach our children to eschew — usually in Sunday School when we teach them the Golden Rule — or maybe later in life by reading books like Everything I Need to Know I Learned in Kindergarten. We have dealt with the negative aspects of these beliefs since our country’s inception — and, it goes without saying, a society built on these concepts is a disgrace to democracy.

In 2013, the GOP released a 97-page report, the Growth and Opportunity Project (pdf) trying to decipher how the Party lost the 2012 presidential election to Barack Obama. The report, which became known as the autopsy report, spelled out specific changes the Party should embrace to maintain a relevant presence on the national stage. A few of the points it listed were:

But Trump happened and the new play book was thrown out.

Although his rise to prominence was due to his carefully orchestrated exploitation of the inherent weaknesses of the primary system, Trump’s presidential campaign is currently in a freefall after tapes of him bragging about sexual assault to a giggling Billy Bush were leaked to the press. GOP leaders, women more quickly than men, are unendorsing the candidate, much to the chagrin of Bill O’Reilly wannabe Tomi Lahren who, like many, is trying to reduce the scandal down to some bawdy language. It’s not about language, as countless commentators, comedians and moms have pointed out. It’s about the abuse of power and the willful disregard of another person’s rights.

Not everyone in the GOP is embracing this 5-star deplorable movement. Ohio Senator Rob Portman, who distanced himself from Trump over the weekend, supports same-sex marriage because, as is often the case, when a political position becomes personal it is reevaluated. Several years ago Portman’s son, Will, announced he was gay, and Portman reconsider  — and reversed — his view on same-sex marriage. Preble County’s (and Ohio’s 8th) former Congressman John Boehner, a Catholic — possibly taking his cue from the 2013 GOP report — abandoned the long held GOP anti-gay agenda and campaigned in 2014 for an openly gay GOP Congressman.

Xenophobia is a blight on America’s collective consciousness. It’s why we turned away Jewish refugees in WWII. It is why a Minnesota farmer in the early 1900s was abused and beaten — first physically then by the legal system — for being a German-American when anti-Germany sentiment ran high in the country.

Fear of non-Protestant religion is another unsolved problem. Although Hillary correctly stated in Sunday’s debate that Muslims have been in this country as far back as George Washington, she did gloss over the persecution they endured. In the beginning, the preferred religion was white Protestant — as Jews, Catholics, Muslims and even various sects of white Protestant churches were persecuted — with a handful of Quakers and Baptists being imprisoned or executed during the colonial era.

As late as the 1850s a gang of thugs associated with the Know-Nothing political group (a political forefather of Trump’s movement) bombed a missionary school run by Father John Bapst, and when damp weather prevented their scheme to burn the missionary alive, they tarred and feathered him. His real crime was being Catholic — and none of the Know-Nothing fear mongers, convinced Bapst was trying to ban the Bible from the United States, were ever charged in the crime.

Despite Muslims living peacefully and productively in the United States in the years leading up to and after 9/11, once the terror attacks occurred president George W. Bush was quick to halt Islamophobia from wreaking havoc on our society. Addressing the nation on Sept. 20, just nine days after the attacks, Bush reached out to Muslims saying,

I also want to speak tonight directly to Muslims throughout the world. We respect your faith. It’s practiced freely by many millions of Americans and by millions more in countries that America counts as friends. Its teachings are good and peaceful, and those who commit evil in the name of Allah blaspheme the name of Allah. The terrorists are traitors to their own faith, trying, in effect, to hijack Islam itself. The enemy of America is not our many Muslim friends. It is not our many Arab friends. Our enemy is a radical network of terrorists and every government that supports them.

Countless books have been written on this subject, but Christian author Robert P. Jones may have best summed up, in our modern era, what proponents of All Lives Matters have failed to understand in their rush to put Black Lives Matter behind them. In his 2015 book The End of White Christian America Jones, CEO of the Public Religion Research Institute notes,

Given White Christian America’s long history of complicity in slavery, segregation, and racism we are at the beginning, not the end, of the journey across the racial divide.

Stickin’ It To Them

In the slow simmering of Trump’s implosion, one may expect local GOP leaders to do as the national leaders and distance themselves from Trump. Instead they have hunkered down on their dark horse candidate — placing an additional ‘deplorable and proud of it’ sign on the sidewalk Tuesday, Oct. 11, the last day of voter registration in Ohio — and by posting this video on their Facebook page.

In the video, Lance Wallnau uses the phrase “anointed vessel of God,” when describing Trump, who Wallnau claims has been undergoing a metamorphosis since about 2004/2005  — when Trump, apparently was chosen by God (despite the grabbing women’s genitalia thing) to rise up and lead this nation. 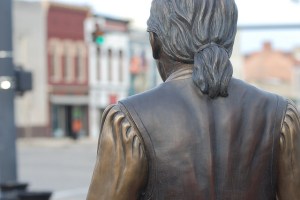 Wallnau goes on to compare Trump to Samson. Of course, missing in the comparison is Samson’s heroics. Samson took one for the team by pulling down the temple upon himself to save the Israelites. Trump isn’t that heroic, choosing instead to put it to the team — boasting he was thankful to be unshackled from an organization that constrained him.

If you look at Wallnau’s About Me page, though, you may find a more plausible reason why Wallnau has so much faith in an anointed Trump. One of Wallnau’s students was a winner on Trump’s Reality TV show, The Apprentice. So, in keeping with the biblical focus of his Facebook video rant maybe mammon is what’s driving Wallnau’s position with God’s chosen, albeit seriously flawed, vessel.

There are plenty of valid reasons why responsible church leaders, school officials, civic leaders, politicians and parents teach children not to embrace the five deplorable principles. They’re uncivil. They’re not democratic. They do not bring out the best in a person or in a society. They are not something to ‘hang your hat on.’ They foster hate, encourage divisiveness and partisanship. They prevent compromise and progress.

Simply put they are deplorable — and nothing to be proud of.

Although the local GOP spelled the lesser used word deplorable correctly, they struggled with the word they spell every election cycle — Headquarters. If they would have dropped the U as well as the R, it could have been a play off of the old standard ‘What is missing from ch__ch — UR.’