Posted on April 6, 2016 by CharlieClaywell 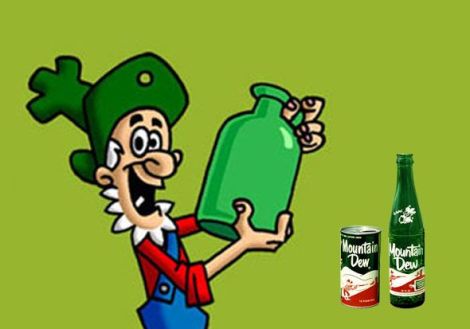 Today, April 6, marks a three-month accomplishment for me – January 6th was the last time I drank a Mountain Dew. In the scope of accomplishments – it hardly ranks high – but, for me, it signifies a shift.

I began drinking Mountain Dew in my preteen years, so by the time I quit I had been consuming the sugary liquid for more than 40 years and on some days I drank more than two liters. It is quite possibly the reason my gallbladder was removed last year – a gallbladder the doctor described as partially dead and rotten.

But as I write this, I still occasionally crave the drink.

Change is Hard
Admittedly, it’s not a major accomplishment to forgo a sugary drink, but change at any level is work. Scientists theorize this is because we have a limited amount of willpower at our disposal. Another compelling reason we don’t change is we fail to understand what motivates our actions. Too often every day is a repeat of the previous one. We fail to question our actions or to understand our world.

Such was the case of one mother who chose tradition over reason.

As she prepared a ham for the Sunday dinner this mother cut about 3-4 inches off the end and wedged it into the pan on one side of the ham. Her 6-year-old daughter, like many young children do, asked why she did it.

“Because that’s the way my mom always fixed a ham.”

“Why, did she do it that way,” the little girl persisted.

“I’m not sure, why don’t you ask Grandma when she comes over today,” the mom replied.

When grandma arrived a few hours later, the little girl did just that. “Why do you cut the end off the ham when you fix it – mom said she never knew why – but she fixes hers that way, anyway.”

“Because my pan was too small,” Grandma said.

Think Before You Do
Questioning our actions or beliefs is difficult. It’s much easier to slice off the ham because it has always been done. Some work feels better without mental input. But questioning can lead to a better understanding. As Orville Wright said,

If we all worked on the assumption that what is accepted as true is really true, there would be little hope of advance.

As I have written before, I challenge what I was taught because truth can withstand scrutiny. But, my view of America has shifted significantly in the past several years as I have read, researched, pondered and written on her history and politics. Much of what I was taught no longer lines up. Raised in a Republican-leaning family, inside a white evangelical church that interpreted the Bible literally and in a lower socioeconomic class, I had a view of my country based on what I knew and what my environment delivered.

At times, I still crave that view. It painted the world in clearly, defined lines – there was an “us” and a “them”.

But history is messy. Stories are told from bias angles and even eye witnesses fail to see it all correctly. To truly understand the country’s past (and future) is to embrace knowledge even when it flies in the face of a perceived truth. As Napoleon Bonaparte said, “What is history but a fable agreed upon?”

Them is Us
American political parties prey upon our history’s messiness and our adherence to our own version of Truth. Like tossing a bone to a pack of hungry wolves, politicians throw out wedge issues to divide and conquer American voters — effectively herding people into an appropriate stall of thought. A few Americans rise above the game, understanding that even in a country where 70 percent of the population identify as Christian — politics is about power and not service.

The experiences of my life led me to believe there is an us –and not a them – them is a manufactured reality based mostly on fear but sometimes on hate. It serves no greater good. We are all essentially the same, cut from the same cloth, men and women, who want to be a productive part of something larger.

We were engineered to do good.

But, one of the greatest paradoxes of the American Way is how our adult lives clash with our upbringing. Most Americans are taught at a young age to play nice, share and help each other. Children are not naturally racist, homophobic, xenophobic or filled with hate. But by the time they are adults, many have absorbed traditions and beliefs that hinder their growth and cloud their views.

Just Sayin’ Christianity
Robert Fulham said, All I Really Need to Know I Learned in Kindergarten, but in the modern era, a more apt title may be All I Need To Know I Learned on Facebook. It is the new bar room — a place where every conceivable idea is promoted as Truth. Some ministers have even joined in, using social media to push their Truth — a video of one of these ministers landed on my Wall. His hate-filled message, interspersed with his own personal fear, hid behind the words of Jesus as this minister pushed and cajoled the Messiah down a path to a more Americanized version of Christianity. It was a version of godliness that the minister could embrace more easily. It was one affirmed the man’s fears and prejudices.

But as his just sayin’ approach went viral, the minister was doing the very thing Jesus condemned – straining the gnat and swallowing the camel.

He was simply a tool of division because quoting the Scripture is not the same as understanding it.

America has plenty of camels that the minister could have addressed if public morality was his ultimate goal. But it was the gnats, those legalistic interpretations of the law and Bible, that commanded all his attention.

What Would Jesus Do?
There was a time in American history when a large group of ministers were instruments of positive change, not tools of divisive politics. These ministers preached a Social Gospel and it was their movement in the late 1800s that coined the phrase – What Would Jesus Do.

This Social Gospel brought positive change to the United States. By the 20th century this Social Gospel was the driving force behind many of the much-needed upgrades to American life. One defining moment in American Protestant Church history occurred in 1907 and 1908 when The Social Creed was adopted by most of its churches.

Passed first by the Methodists in 1907, the Social Creed called for many measures to alleviate problems created by the new industrial workplace. They successfully fought for the alleviation of Sunday working hours, the elimination of child labor, and the creation of disability insurance for workers injured in factories.

There Must Be A Better Way
As Lisa Sharon Harper points out in Evangelical Does Not Equal Republican… or Democrat – the Social Gospel viewpoint shifted drastically after fundamentalism, with its emphasis on the impending destruction of the world and the Second Coming of Jesus, was introduced to the American culture. This is because of logic that surmises,

If the world is on the path to imminent destruction, social reform is a waste of effort and time. Personal transformation is all that matters.

This obsession with impending doom opened the door to political exploitation of many, including the Religious Right, by melding the non-compromising approach of personal religious conviction with political rhetoric. This union was destined to create governmental gridlock since, by its very nature, our democratic-based Republic, demands compromise to accommodate the needs of its citizens. One of the fathers of the modern conservative movement, failed 1964 presidential candidate Barry Goldwater, dryly admitted as much, when he said,

Mark my word, if and when these preachers get control of the [Republican] party, and they’re sure trying to do so, it’s going to be a terrible damn problem. Frankly, these people frighten me. Politics and governing demand compromise. But these Christians believe they are acting in the name of God, so they can’t and won’t compromise. I know, I’ve tried to deal with them.

America And God
Religion has played many roles in our country’s history — both good and bad. In the case of the Social Gospel, it championed much needed change. In the case of some southern ministers, the Biblical story of Noah cursing his son Ham into slavery, was  ‘proof’ that God endorsed slavery — a very self-serving interpretation of the passage. But what I have come to know is, many of the Founding Fathers were Christian, and plenty were not and, through a series of debates and compromise, these men eventually settled upon a rational approach to church and state.

It was a matter of practicality — since the Founders were concerned first, and foremost, with the strength of the nation — not of an individual’s preferred religious beliefs. It may be why God was left out of the Constitution because even in the country’s inception, religious beliefs varied widely, and men like James Madison understood that if a government embraced a specific religion — it was a small step for the government to embrace a particular sect of that religion.

Unholy Union
So, it was a conservative, Christian preacher who help pave the way for the religious freedom we have today. As a Baptist in the colonial era, John Leland, knew what it meant to be persecuted. He had dealt with men straining the gnats, but unlike the modern-day, social-media savvy minister on my Wall, Leland did something important — something that outlasted him. He joined forces with Madison and Thomas Jefferson, even though at least one of the men, Jefferson, did not even believe in the divinity of Jesus. Leland fought for social change. In A Chronicle of His Time in Virginia, Leland wrote.

The notion of a Christian commonwealth should be exploded forever. … Government should protect every man in thinking and speaking freely, and see that one does not abuse another. The liberty I contend for is more than toleration. The very idea of toleration is despicable; it supposes that some have a pre-eminence above the rest to grant indulgence, whereas all should be equally free, Jews, Turks (Muslims), Pagans and Christians.

Now, that’s a belief worthy of a nation which champions personal liberty and freedom. And, for me, it feels much more productive — and Christ-like– than a ‘just sayin’ approach to Christianity.