Shopping For My Own Version Of Reality In Trump Town

Posted on April 3, 2017 by CharlieClaywell 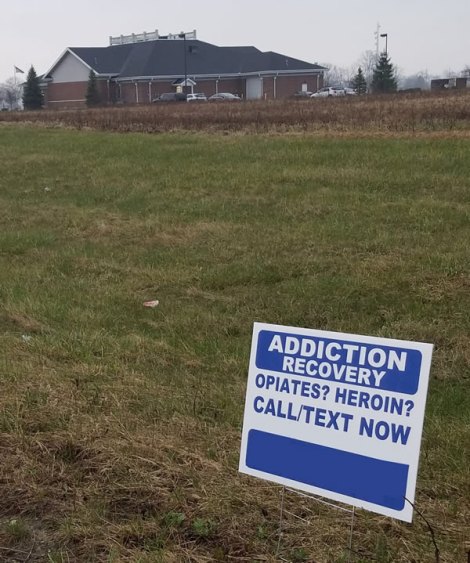 Sign popping up in the various communities in my county. This one is near the Eaton Municipal Court (pictured in the background).

(Note: Since the presidential election was won at the county level, I’ve come to believe that counties like Preble are a microcosm. And, how we deal — or do not deal — with problems is vitally important because the societal problems that are plaguing small towns are also negatively impacting the country.)

According to one local politician Preble County has a great workforce. It’s a great tagline, but it’s at odds with what the official said just a month earlier when he commented on the local job market. A month or so ago he said there were ‘plenty of good jobs, but workers can’t pass a pee test.’

The pee test comment may be closer to the truth since help wanted signs — mostly for temp service jobs — are popping up in the community.

But the politician’s shifting viewpoint speaks to the issue many Americans face these days. As Matt Taibbi points out in Insane Clown President, we now shop for our preferred version of reality. Those on the right shop at Fox News while those on the left shop at MSNBC. And, some find even more extreme venues of liberal and conservative information. This consumer-based approach to information led to the breakdown of a common narrative — a common set of facts we all can agree on.

Without a common narrative, solutions are improbable.

American history has shown that various regions of the country hold wildly divergent views on civic involvement. In southwest Ohio, with our strong historical ties to both the Backcountry and Virginia colonies, we have a tendency to look to leaders to solve our problems — as opposed to the New England colonies’ ‘town hall’ approach which tends to be more community based.

So, locally, if a public meeting has members of the public in attendance it is because someone is receiving an award or — most likely — because people in attendance are on the receiving end of a detrimental rule, law or ordinance. In a general sense, what the citizens in attendance say falls on deaf ears because the governing body is simply engaging in a CYA action to satisfy a public notice/public meeting regulation. By this point of the process, the governing board is not overly interested in citizens’ concerns because the political leaders are in the ‘selling/marketing’ phase.

So, our approach is simplistic: The leaders have reached a decision, and the public must accept it. Understandably, this method of governing generates a high level of mistrust from the average citizen. It also perpetuates a system where elected officials tamp down opposition as they bulldoze an agenda into law.

Not As Well Off As We Were

Like many communities in the Rust Belt, our level of affluence has fallen significantly in the past 50 years. In the 1950s, the community I grew up in the 1970s, West Alexandria (pop. 1,200), was able to generate the equivalent of  $400,000 — to build a community swimming pool. An editorial in the town’s newspaper bragged about how the community was able to accomplish this, without tax dollars, despite the lack of ‘wealthy’ citizens.

The approach used in 1953-1955 by the village differs significantly from the recent approach of local school districts to build athletic complexes. In these cases, the fundraising relied heavily on a handful of wealthy donors. This speaks to two current realities. First a strong sense of community binding people together in a common goal has weakened and, local residents do not have enough discretionary income to donate. The latter speaks to the quality of jobs that exist — or the skill level of the workforce and the jobs those skills can attract. In the 1950s, we were awash in manufacturing jobs, many with union wages. Today, in the United States, retail salesman is the most popular job title. In Preble County, retail is the second most popular segment, manufacturing is still our most popular segment, however, we are mostly a union-free county.

Heroin Addiction And The Workforce

Ohio’s job prospects — and its economy — has not performed as projected and as CNN recently reported, American workers are failing drug tests at the highest rate in a decade. Preble County is presumably no exception since we have a heroin problem.

But, one common theme in the heroin story is that heroin addiction does not distinguish by class. In other words, the rich and the poor are equally affected by the drug. Another common thread locally, at least with some of the gatekeepers, is ‘if you make a bad decision I can’t help you,’ which, although a popular stance, displays ignorance about drug addiction — and it’s politically lazy.

Living in a should’ve, could’ve world is a fantasy-based reality. People are addicted to heroin in Preble County and it needs to be solved, not vilified. It needs to be solved so employers can employ. So workers can work and spend. So a local economy can thrive.

Preble County heroin cases, at least those processed through Common Pleas Court, suggest heroin addiction does discriminate based on class — unless, of course, wealthier users are able to bypass the court system through insurance-based treatment. Of the 63 cases processed between July 1, 2015 and December 31, 2016 in all but four of the cases the defendant was ruled indigent by the court.

This, of course, creates a financial drain at the county level while increasing the anger many non-addicts feel toward the addicted, making it easier to dehumanize heroin users. This is especially notable when political leaders refer to them as ‘druggies.’ Since I personally know friends, former co-workers and family members who are addicts or recovering addicts, I resist terms like ‘druggies’ because the individuals I know did not wake up one morning and decide that today was the day they would become addicted to a chemical.

In a recent article, it was noted that my county is refunded, by the state of Ohio, 48 percent of the cost associated with indigent cases. The tone of the statement suggested county gatekeepers had negotiated us back ‘up’ to the 48 percent threshold, when in reality (I listened to the audio of the discussion) county officials did not negotiate. As a small, impoverished county we have the political power of a gnat. Ohio told us how much we would receive. It’s a twisted version of ‘what’s fair for the goose is fair for the gander.’ Although gatekeepers relish in their ability to ‘tell’ the indigent what they will receive and when, these same gatekeepers — based on their recorded posturing — are less open to the methodology when they are told by a more powerful gatekeeper what they will get.

Do We Have A Problem?

If anecdotal methods are proof of the type of workforce we have in Preble County, I will relay what one worker told me. They said the company they worked for had a lot of turnover because the ‘younger guys’ work until they were paid and then they ‘quit showing up.’ They indicated drug use was the culprit.

Other indicators include newspaper ads and articles which suggest local firms are struggling to find quality workers. For example:

But it may be the county’s own marketing site that offers the best clues about our workforce. Information on their site shows that prime-aged workers — those aged 25-54 — are moving out of the county. It also shows that the number of available jobs within the county has declined since 2007.